Sunday night’s Super Bowl was one for the ages. Anyone who gave up on the Patriots by the third quarter of the game (we’re looking at you, Mark Wahlberg) and either left or turned the TV off will have seriously regretted doing so, after the most insane fourth quarter in the history of Super Bowls went down. By the end of third quarter, the Pats were behind the Atlanta Falcons 28-3.  At the beginning of the fourth quarter, the Patriots, who had been seriously struggling for the first three quarters, seemed to catch a second wind. As Tom Brady completed pass after pass and they finally began to score, their momentum continued to grow. 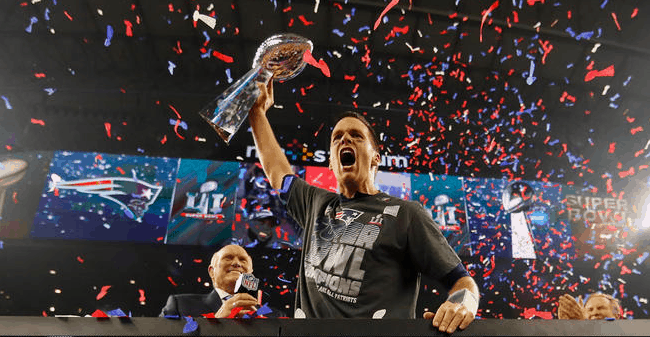 With only 45 seconds left in the game, the Patriots successfully scored a touchdown and went for a two point conversion, tying up the score to 28-28. As the finals seconds ticked away, the tie remained, and thus the first ever Super Bowl overtime began. The Patriots and Falcons became the first two teams in the history of the Super Bowl to participate in an overtime for the championship game. The Patriots won the coin toss and were given an opportunity to go for the win. The final drive of the game was almost flawless for the Patriots, with Brady completing pass after pass with impressive precision. A pass interference call on the Falcons after the Patriots neared the end zone sealed the win for the Patriots, making it their fifth Super Bowl win. Tom Brady became the winningest Super Bowl quarterback of all time, with five Super Bowl rings to his name.

The Super Bowl is the most watched sporting event of the year, and celebrities quickly took to social media in order to share their thoughts on the comeback win. The reactions ranged from ecstatic, to devastated, to neutral. Check out some of the celebrity tweets: 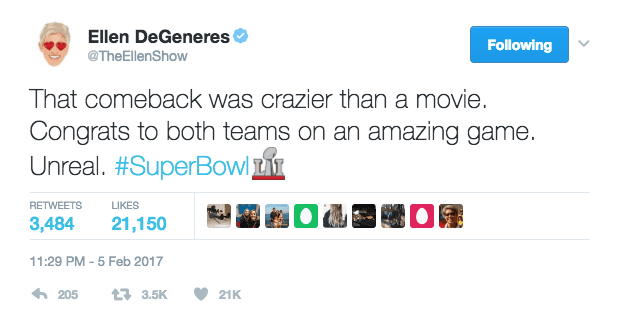 Actress Reese Witherspoon showed her support for the Atlanta Falcons:

Football player Jeremy Langford tweeted his opinion of the game:

Marshawn Lynch, who suffered a loss to the Patriots in 2015, tweeted his reaction and respect for the Patriots win:

Soccer star Leo Messi tweeted his congratulations to the Patriots: 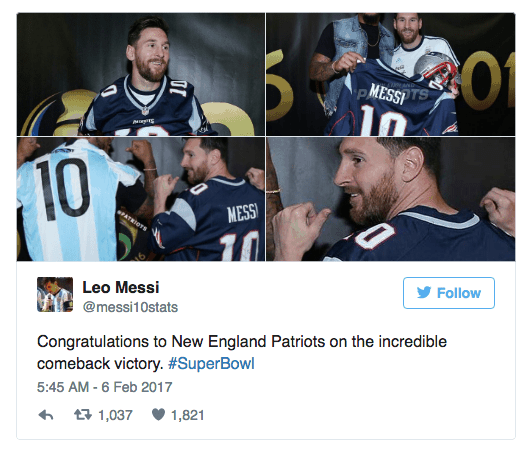 The President of the United States even shared his thoughts:

Everyone Was Wrong, According To Legged Snake Fossil

As the quest to understand our present has us piecing together as many parts of the past as we can ...

Sometimes, life leaves scars, and this accomplished tattoo artist from Hecker, Illinois does an ...